The ALSD Announces Jim Thome as a 2019 Conference Keynote

The Hall of Fame slugger will help leadoff the 29th Annual ALSD Conference and Tradeshow when he sits down for a keynote interview on June 30. 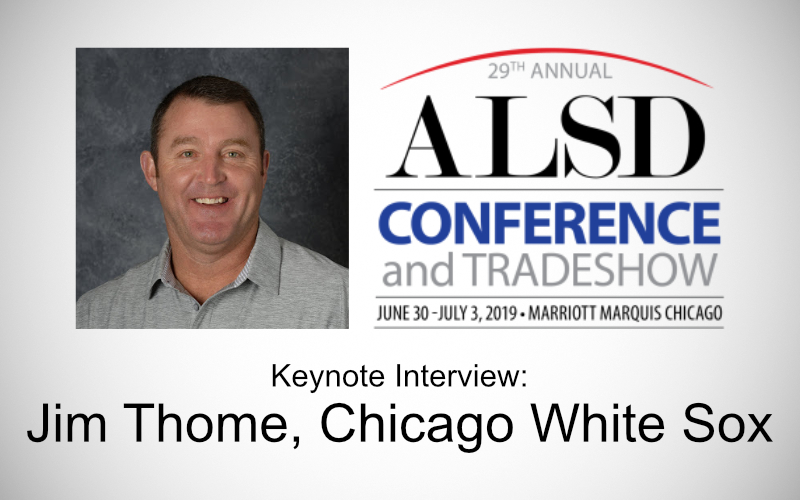 The ALSD is proud to announce Hall of Famer Jim Thome as our Keynote Interview for the 29th Annual ALSD Conference and Tradeshow. ALSD 2019, which also includes the 6th Annual Sports Venue Design & Build Forum and 5th Annual Sports Sales Training Forum, will take place June 30 – July 3 at the Marriott Marquis Chicago. The Thome keynote will leadoff this year’s program of educational sessions, venue tours, and exhibit hall demonstrations on June 30 at 3:30pm.

“Jim Thome’s statistics speak for themselves. There are only a handful of baseball’s gods who match his production. But it’s his character, longevity, and commitment to the sport that led us to booking him as a keynote for this year’s conference.”

Thome is one of only eight players to reach the 600 home run milestone, and his 612 homers are the fourth-highest total in major league history by a left-handed hitter, trailing only Barry Bonds (762), Babe Ruth (714), and Ken Griffey Jr. (630). He hit 40 or more home runs six times and drove in 100 or more runs nine times.

He ranks among baseball’s all-time leaders in myriad other categories, including home run ratio (5th, 13.76), walks (7th), OPS (18th, .956), and slugging percentage (22nd). Thome duplicated his regular season success when it mattered most in the postseason, where his 17 home runs are tied with David Ortiz for the seventh-highest total in major league history.

“Jim Thome’s statistics speak for themselves,” says Bill Dorsey, ALSD Chairman and Founder. “There are only a handful of baseball’s gods who match his production. But it’s his character, longevity, and commitment to the sport that led us to booking him as a keynote for this year’s conference. He was beloved over his two decades in the major leagues, multiple teams bringing him back for a second stint due to his leadership as well as his performance. It’s no wonder why he was a first ballot hall of famer.”

In his four years with the Chicago White Sox, Thome and his trademark batting stance celebrated numerous other definitive career achievements, including his 500th home run on September 16, 2007 versus the Angels. He is also memorialized in the annals of White Sox history for his game-winning solo shot on September 30, 2008 to give the White Sox a 1-0 victory over Minnesota in a one-game playoff at U.S. Cellular Field.

REGISTER NOW FOR ALSD 2019 to hear the legendary Jim Thome speak at this year’s annual conference and tradeshow.