Liverpool Football Club’s iconic Anfield stadium stands like a guardian, proudly watching over the city below it. The world-famous club, owned by Fenway Sports Group, recently completed a major redevelopment of its Main Stand back in 2017 and is now looking to potentially transform the Anfield Road Stand.

LFC’s new Main Stand has won many awards and accolades, including for best “Interior & Fit Out”, with judges commenting on how the new concourses highlighted both excellence and innovation in design, creating visually impactful sustainable solutions that were not only efficient in guiding fans, but also reinforced Liverpool FC’s famous brand.

The development forms part of a Liverpool City Council-led regeneration of the wider Anfield area, with the masterplan including a major residential improvement programme, plus a new Planit-IE-designed public realm space, which runs behind the Main Stand and links Walton Breck Road to the south to the historic Stanley Park to the north, all of which is now complete.

The new setting has allowed the Main Stand to look outwards as well as inwards, in turn generating opportunities to build a commemorative garden for the relocated Hillsborough Memorial at the heart of the ground and an attractive non-matchday environment for the local community.

The capacity of the Main Stand has increased from 12,200 to over 20,500 seats, making it the largest capacity single stand in the country. The existing lower tier retains general admission (GA) seats but also includes new hospitality and box seats to the rear, whilst the new middle tier provides further hospitality seats and the new upper tier a further 8,000 GA seats.

Whilst the expanded Main Stand is a big statement, visible from miles around, and the additional seating creates another dimension to the unique Anfield matchday experience, it still feels like it is part of the ground as a whole. The architecture and interior spaces reinforce the concept of a premium stand in an honest and sympathetic way that reflects the values of the club and its supporters.

The next project the club has in its sights is a proposed reimagining of the Anfield Road Stand.

Local residents, representatives, businesses, and supporters have all been invited to review Liverpool FC’s updated plans, which have been reshaped based on the feedback received in the initial stage of public consultation held in December 2019.

“We’re delighted to host the annual ALSD International conference at Anfield stadium... We are looking forward to welcoming colleagues and delegates from across the premium seat and hospitality sector.”

During the first stage, more than 800 responses were received. The majority of feedback was positive and supportive of the club’s vision, along with some constructive feedback from local residents on the impact of the proposed closure of a section of Anfield Road.

Based on this feedback, the club’s second stage of plans now sees Anfield Road realigned around the footprint of the proposed expanded stand, demonstrating the importance of the public consultation process and the club’s commitment to the local community.

The club has also progressed discussions on the design and configuration of the proposed refurbished stand. An outline of the number of GA seats within the stand would be 5,200, with around 1,800 seats for lounge/sports bar-style hospitality.

The second stage of public consultation saw three public drop-in events taking place at Anfield between February 12 and 24, providing residents, businesses, and fans a further opportunity to see the updated plans, ask questions, and provide feedback before a planning application is submitted to Liverpool City Council.

On top of all of these plans, progress continues apace ahead of the completion of Liverpool FC’s KSS-designed training centre in Kirkby this summer.

The state-of-the-art training complex will bring together Liverpool’s First Team and Academy operations together for the first time in the club’s history. The new 9,200-square-metre training centre creates a combined First Team and U23 Academy facility, each having its own identity, along with new First Team pitches and parking within the site.

“We’re delighted to host the annual ALSD International conference at Anfield stadium in October this year and showcase the home of Liverpool Football Club,” says Paul Cuttill, Vice President – Stadium Operations for Liverpool Football Club. “We are looking forward to welcoming colleagues and delegates from across the premium seat and hospitality sector for what promises to be an exciting and informative event.”

Situated the other side of Stanley Park sits Goodison Park, the home ground of Everton Football Club.

The city’s other English Premier League side invested in a major renovation project last year, which saw the transformation of the stadium’s hospitality lounges, with all suites and event spaces refreshed and upgraded.

Work on all nine hospitality lounges took place during last year’s close season, with a full transformation of the lounge appearances, along with updates to audio-visual equipment, all completed ahead of the 2019-20 season.

Ahead of the club’s proposed move to Bramley-Moore Dock, subject to planning approval, the multi-million-pound investment has improved matchday facilities for members, while showcasing and testing new concepts which the club could look to take forward into a new stadium.

“This project will help us bring Goodison Park’s hospitality offer up to a level which reflects the aspirations of the club,” says Oliver Wright, Head of Hospitality and Sales at Everton. “The refurbishments to all our lounges will enhance the experience for members and demonstrate what our approach to hospitality at a new stadium could be like.” 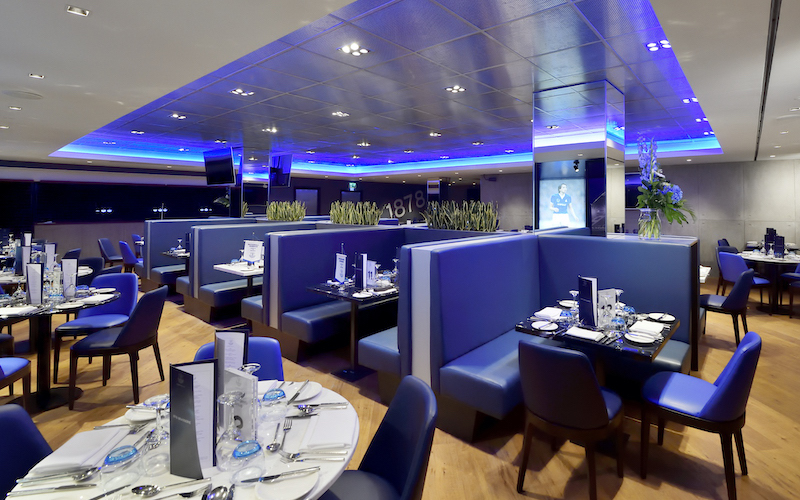 A Preview of What’s to Come: The recent renovation of Goodison Park’s nine hospitality lounges (including the 1878 Brasserie pictured here) is a test bed for the hospitality offer at the proposed Bramley-Moor Dock stadium. Oliver Wright says, “The exciting new concepts we have created are uniquely Everton.”

Hospitality lounges at Goodison Park have, and continue to be, sold out for a number of seasons, and the move to Bramley-Moore Dock will enable the club to further expand its hospitality offering.

“The exciting new concepts we have created are uniquely Everton and will be a test bed for themes as well as an opportunity to expand the appeal of our hospitality experiences in the future,” adds Wright.

The club worked with 2M2 Studio, the architectural firm responsible for delivering the first-class facilities at the Royal Liver Building, for the designs of all nine hospitality lounges at Goodison Park.

Dan Meis of MEIS Architecture is the designer in charge of bringing the club’s vision for a new stadium at Bramley-Moore Dock to reality. The start of construction work on Everton FC’s new stadium later this year could help boost economic confidence in the wake of the coronavirus pandemic. Henri Murison, Director of the Northern Powerhouse Partnership, believes the project will kick-start the economy in the Merseyside region and beyond.

Sodexo has made a major investment into M&S Bank Arena Liverpool to enhance the customer experience. Centerplate UK Limited, a subsidiary of the Sodexo Group, supports the ACC Liverpool Group with retail, catering, and hospitality services. Three new catering units have been installed. Six existing kiosks have been revamped. And new menus have been introduced to provide greater choice to customers and to improve the speed of service in the arena.

Each new food offer has been inspired by and named after a historic Liverpool dock, with concepts including South Seafood, influenced by fisherman’s dock South Ferry Basin, and Prince’s Chicken, named after Prince’s Dock, which brought exotic spices from the Caribbean.

Tom Beauchamp, Sodexo Development Chef UK & Ireland, has created new menus, which have been specially adapted depending on the event.

“Our versatile new food offering will include items such as chili and lime chicken wings, sticky sriracha beef ribs, and classic pizzas,” says Beauchamp. “Menus will also be tailored to the shows that our customers have come to see. So for example for Mrs. Brown’s Boys, we offered menus with an Irish theme. We are passionate about providing great tasting food and are delighted to be able to offer a much wider menu for customers before they head into the arena to enjoy a performance.” 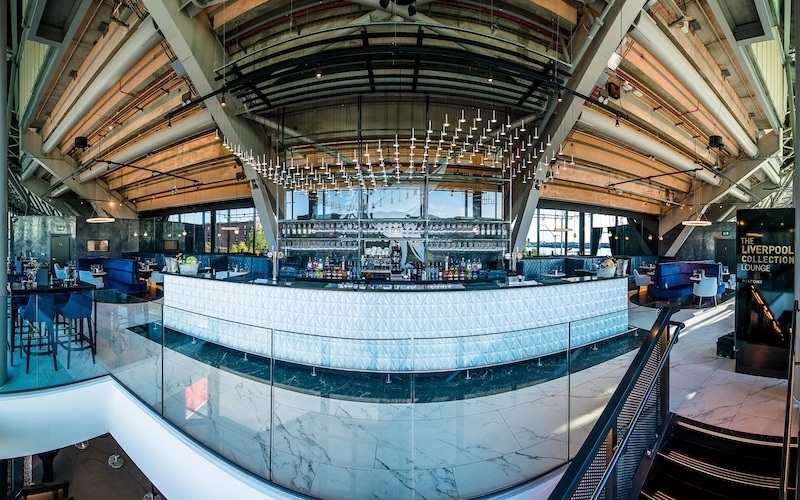 Behind-The-Scenes Excitement: ALSD International will observe the significant investment made at M&S Bank Arena to multiple foodservice and hospitality areas. Ben Williams says, “We are looking forward to welcoming guests to the Liverpool Gin Lounge (pictured above) for some great networking opportunities.”

Drinks options have also been improved to include a wide range of draft beers, IPAs, and ciders for those who are seeking liquid refreshment. Meal deal options have been created to allow customers to enjoy a full dining and drinking experience.

Sodexo has worked closely with the ACC Liverpool Group to implement these changes.

“We want all our visitors to have a fantastic experience when they come to watch a show at M&S Bank Arena, which should start as soon as they walk through the door,” says Ben Williams, Commercial Director at the ACC Liverpool Group, operator of M&S Bank Arena. “It’s important that guests can relax with a drink and a tasty bite to eat and make a night of it.

“We have been working closely with Sodexo and have made a significant investment to open three new units on the arena concourse and refurbish existing kiosks. We have upgraded equipment so will be able to offer a wider range of food and drinks while improving service. We continuously look at how we can enhance the visitor experience and have further developments planned for the future.”

Attendees at ALSD International will begin day one of this year’s event with a networking reception in the venue’s brand-new Liverpool Gin Lounge, while also being treated to a behind-the-scenes tour of M&S Bank Arena Liverpool before alighting buses bound for Anfield.

About ALSD International
Organised by the 30-year-old Association of Luxury Suite Directors (ALSD) in conjunction with Sports Venue Business (SVB), ALSD International is Europe’s one and only entity dedicated to the Premium/Club/VIP Seat and Hospitality sector. The third edition of this industry-leading event, taking place at Liverpool Football Club’s Anfield stadium this October 12-13, will include a high-level conference featuring over 50 top industry executive speakers. The two-day event will also deliver an exhibition hall showcasing the latest products, services, solutions, and numerous networking events to ensure optimised opportunities to knowledge-share and do business, including access to one-on-one meetings, plus behind-the-scenes tours of Anfield, Goodison Park, and M&S Bank Arena.

Join our community of Premium Seating Professionals and instantly grow your network of contacts who actively develop and support the premium seating marketplace.