Through Major League Soccer’s first 24 years, D.C. United has stood as one of the league’s most successful clubs, but they have never had a soccer-specific building to present The Beautiful Game in the way it is best experienced... until now.
By Dave Wakeman 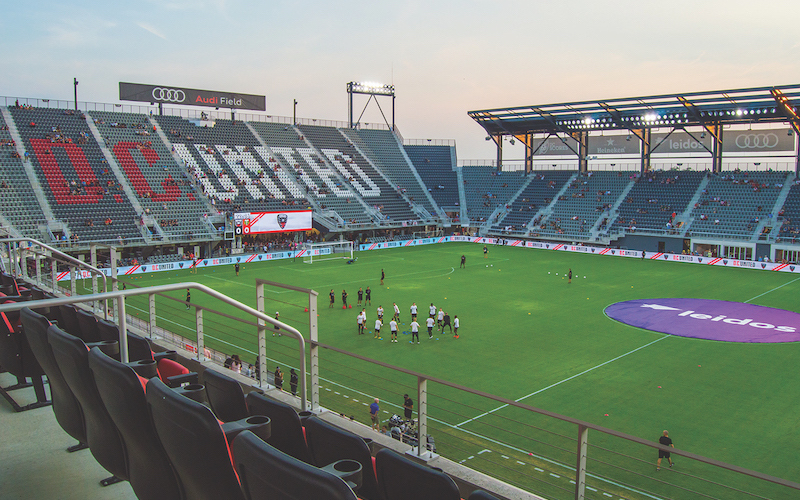 D.C. United won the first two MLS Cups and four Supporters’ Shields, representing the team with the best regular season record. All of this success came while playing home games at Robert F. Kennedy Stadium, a building more well-known for the success of the Redskins than the success of D.C.’s futball team.

In July, D.C. United began play in their first soccer-specific home, Audi Field, in the Buzzard Point area of Southwest D.C. The 20,000-seat stadium stands nestled next to the Potomac River and offers a more convenient location than RFK Stadium.

With the opening of Audi Field, D.C. United now has the opportunity to reposition their home as a place for fans to gather to watch soccer, and also as a place for businesses to advertise, entertain, and be a part of the D.C. sports scene.

All of these ambitions have been aided by the mid-season addition of global soccer superstar Wayne Rooney. The Rooney signing has changed perceptions and results for the team on the pitch, as well as in pitches to business partners.

On the field of play, Rooney has helped the club transform from a side challenging for the bottom of the standings into a playoff team that had many exciting moments to share with their fans. The most exciting of these moments being a play that is known in soccer circles as “The Play”, when Rooney raced an Orlando City attacker half the length of the pitch, made a game saving tackle that wouldn’t have been out of place in the NFL, turned around, and fired off a 40-yard pass that led to a match-winning header.

Plays like this one helped D.C. United successfully open Audi Field and sell out 14 of 15 games.

On the business side of the team, the addition of Wayne Rooney has transformed the opportunities open to D.C. United. Rooney has made the team not just famous in the D.C. area, but famous globally, from England to China, and in other markets where Rooney and his years with Manchester United hit right at the heart of fans’ nostalgia.

He continues, “More measurably for existing partners, the huge uptick in exposure has translated into major incremental media value for brands activating TV, social, digital, and stadium-visible inventory. From front-of-jersey to field level, and other forms of brand engagement, virtually every valuation has increased considerably since he joined.” 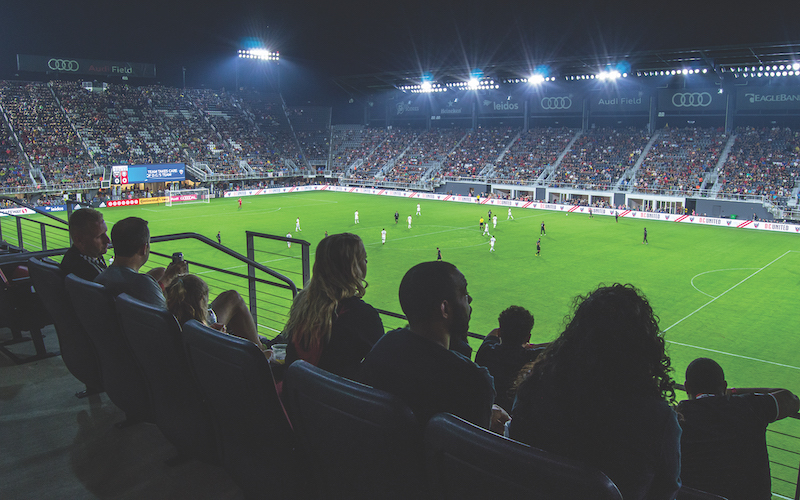 The performance on the pitch and the addition of Rooney might draw sponsors and fans at once, but the experience at the Populous-designed Audi Field has transformed the entire way fans experience the sport in the District.

For the first time in the club’s history, fans have the opportunity to experience the game in a way that the club feels presents the game in the best light possible. This presentation begins as fans approach the stadium from parking lots and mass transit on the northeast side of the venue. Fans first encounter a fan plaza complete with games, sponsor activations, and areas to gather and meet fellow supporters.

As visitors approach the stadium, they notice views of the pitch, a unique design element, as most stadiums are entirely enclosed, and the pitch is below street level. This feature was meant to ensure that the stadium has a sense of connection to the community that surrounds the building. 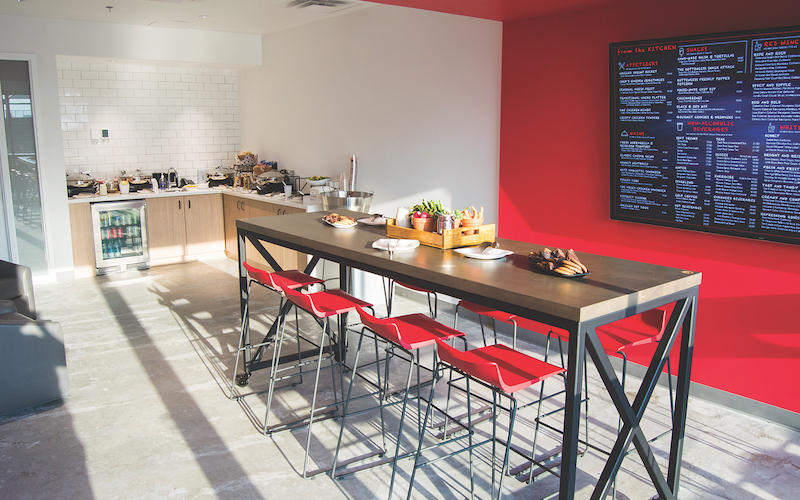 Through partnerships with Levy and Jose Andrés’ ThinkFoodGroup, the F&B experience throughout Audi Field focuses on global food offerings.

Once inside the building, fans are met with an experience that feels both intimate and modern.

One of the most prominent features upon entering Audi Field is the team store. The store, designed by local architects at Marshall Moya Design, captures the feeling of the Buzzard Point neighborhood that the stadium lives in, but also the feelings of excitement and extreme intimacy that is the building’s calling card.

Marshall Moya Design created this feeling by using concrete, steel, lots of natural light, and the team’s red and black color scheme to design a first-class shopping experience that ensures fans realize they are only feet away from the pitch.

Other elements compound the feeling of intimacy that has become one of the standout aspects of Audi Field.

First, the seating bowl has been designed to keep the fans’ energy contained in the stadium. In the main seating bowl, the furthest fan is only 129 feet from the pitch, and the rake of the bowl captures crowd noise and enthusiasm and pushes them back towards the pitch, giving the team a definite home-field advantage.

With a soccer-specific design, D.C. United offers their supporters a new, concentrated home to stand, sing, and support the team.

Having been established early in the club’s existence, the Barra Brava, District Ultras, Screaming Eagles, and many other supporter groups have been known to generate energy by bringing these supporters groups together in Sections 136 and 137. The club has allowed that feeling of support to become a defining part of the building’s intimate nature. 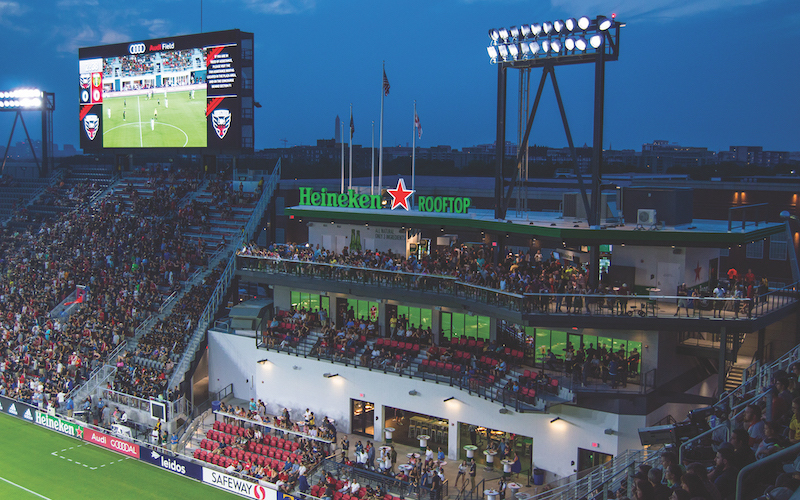 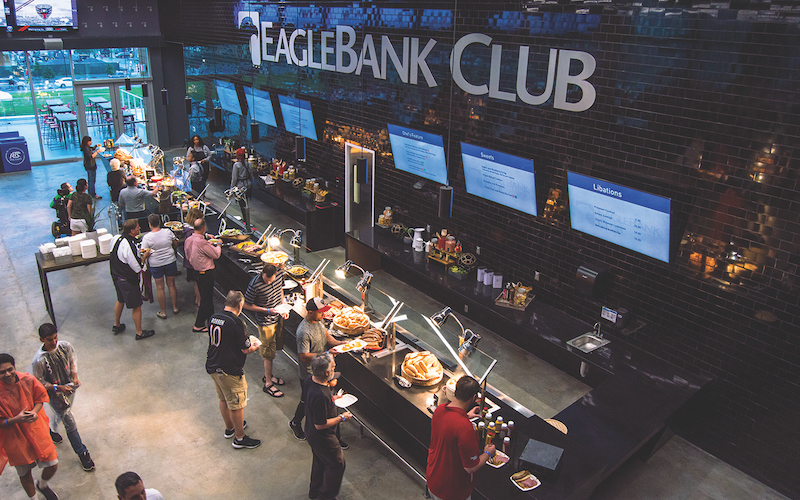 Audi Field is furnished with 2,000 premium seats in the EagleBank Club, Heineken MVP Club, as well as in new suite options.

By moving into a new building, the team now offers fans a new food and beverage experience as well. Partnering with Levy and Jose Andres’ ThinkFoodGroup, the team has reimagined the dining experience, focusing on global food offerings that are also high-quality and freshly prepared, while also keeping some of the traditional foods that are expected at D.C. United matches.

The premium seating at Audi Field has also been a big boost for D.C. United.

“The premium seating that we are able to offer now has really allowed us to change our footprint with the local business community,” says Hull.

With 2,000 all-inclusive premium seats in the EagleBank Club and the Heineken MVP Club, along with a number of new suite options, the team offers something that is unique in the D.C. market.

“The premium seating that we are able to offer now has really allowed us to change our footprint with the local business community.”

“Combining our premium experience with the overall fan experience, the opening of Audi Field has created an opportunity for us to offer the business community an experience that other teams can’t compete with,” Hull says.

On three different levels, the suites offer fans and corporate buyers the chance to entertain, network, and relax in a way that is more intimate than typically occurs for most premium buyers.

The West Side Field Level Suites offer fans the chance to be closer to the action than almost anywhere else in the stadium while still offering guests the ultimate in premium seating comfort, food and beverage, and experience.

The North Tower Suites allow fans the opportunity to watch the match while also enjoying a panoramic view of the city and the surrounding area. Situated in the same stand as Audi Field’s rooftop bar, fans are able to experience both a first-class premium experience that has a unique visual experience, while remaining right in the middle of the fan experience.

Finally, the East Sideline Suites sit right on top of the EagleBank Club and give fans a chance to be right in the middle of the action on the pitch. With these sightlines, guests have some of the best views of the match at both ends of the pitch.

Having pulled all of these design elements together with the opportunity to combine the new building with one of the most famous global footballers, D.C. United has put their best foot forward for fans, both old and new, of The Beautiful Game, knowing that the experience they offer guests now rivals the experience at any other MLS stadium and beyond.