The Cream of the Crop Rises to the Top

The most successful venues in sports and entertainment all have one thing in common: strong leaders who aren’t afraid to challenge the status quo.
By Jared Frank, ALSD 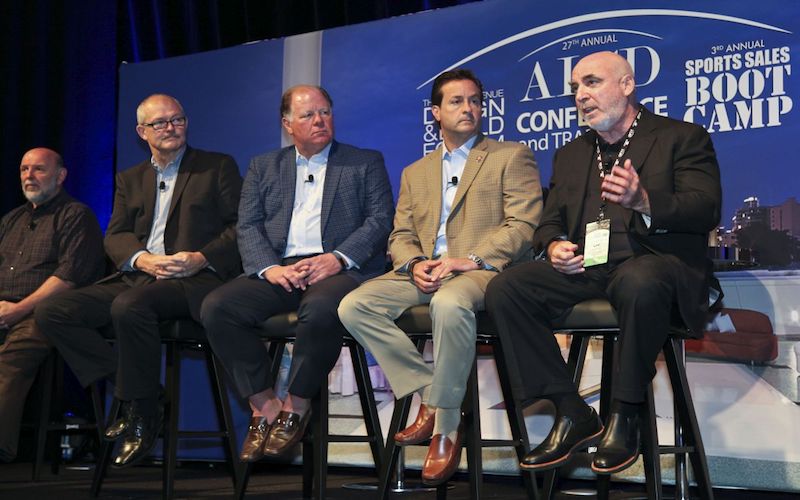 This year’s Sports Venue Design & Build Forum at the 27th Annual ALSD Conference and Tradeshow attracted some of the most veteran influencers in the venue marketplace. Look no further than the Design & Build program’s top billing, which set the tone for two days of top-flight speakers, innovation labs, vendor demonstrations, venue tours, and community-building networking.

The “Cream of the Crop” super panel kicked off our 2017 event. The session featured Brad Mayne, Mark Lamping, Chris Gallagher, Lee Zeidman, and moderator Russ Simons. These five panelists shared many kernels of wisdom that woven together can be summarized under the overall theme of process. It’s not about accolades and resulting glory for these industry luminaries. It's about the process of getting there. It’s how they think about innovation, learn from failures, and decide to invest in capex, training, security, and all the different things that allow their collective organizations to rise toward success.

Disrupt or Be Disrupted

There exists an old-school approach for designing facilities where stakeholders look at other recent new builds, cherry pick some good things they see, and copy them into their own designs. And while not fundamentally wrong, project managers must be nimble, flexible, and invested in their own people to make the dream of constructing a successful sports and entertainment facility a reality.

“One of the things I’ve learned in my career is that things consistently change,” said Brad Mayne, President and CEO of the IAVM, formerly the CEO of MetLife Stadium and American Airlines Center. “And if you’re copying someone else, you may not be doing the right thing.”

“When Mark [Cuban] bought the [Dallas Mavericks], I asked him for some advice for being the CEO of his venue. He said two things: If everyone’s thinking the same, no one’s thinking. And if it ain’t broke, break it.”

Mayne continued, “In fact, when Mark [Cuban] bought the [Dallas Mavericks], I asked him for some advice for being the CEO of his venue. He said two things: If everyone’s thinking the same, no one’s thinking. And if it ain’t broke, break it.”

These ideas of embracing change and disrupting before being disrupted repeated throughout the session and throughout the Loews Miami Beach Hotel over the entire four-day conference.

And disruption begins during design-build phases.

“While I think we wrote the textbook on getting into MLS, we had to throw that textbook out the window when we were actually building [the stadium],” said Chris Gallagher, Chief Revenue Officer at Orlando City SC.

Mark Lamping, President of the Jacksonville Jaguars, took things a step further by pointing out disruption continues through the lifespan of a facility: “The only good buildings are the ones that evolve and provide customers with new and different things.”

Look Outside of Sports and Entertainment

As President of STAPLES Center, Microsoft Theater, and LA LIVE, Lee Zeidman tasks his staff year after year with staying relevant in a crowded marketplace, one known as the entertainment capital of the world, and one in a constant state of disruption. How does his staff do it? First and foremost, through close relationships with STAPLES Center’s four teams, leagues, and founding corporate partners that come with various points of view from different industries.

“When we think about how we innovate, how we get better, the next best things out there, we call on these people,” Zeidman said. “We use these assets because we certainly don’t know it all.”

The panel agreed that the sports and entertainment industry must think broader than its own boundaries. Look for design inspirations in the travel and hospitality industries, at airports and hotels, in retail businesses, and certainly in the technology sector.

Lee Zeidman (far right) explains his leadership personality: “I’m not an innovative guy to a certain extent. I look at myself more like a specialized generalist.”

Give Customers What They Want

Brad Mayne mentored the audience of industry professionals by encouraging them to not be afraid to do something uncomfortable as long as all the data has been gathered, all the questions have been asked, and all the key performance indicators are known for the gamut of possibilities.

“If you focus on one specific direction, you’re probably going to miss the mark,” Mayne said. “You need to look at all the options and weigh all those options collectively.”

“That’s a process that can very easily be mismanaged,” added Lamping. “We can make too many assumptions at times.”

“If you’re not keeping track of how your customers’ needs, desires, and wants are changing on a regular basis, you’re very quickly going to be falling behind,” Lamping said.

Venues must also always listen to their stakeholders and partners.

Be Scientific, Not Emotional

“If you don’t do your due diligence and can’t articulate the science behind your decision, then when you bring it to somebody who is going to make an emotional response, you’re predisposed to fail,” Simons said.

“It pains me when I have to watch people stand 30 minutes in a line to get a beer,” Zeidman said. “Levy came to us with a speed of service program that we’ve just started to implement that looks at everything from how you set your stanchions, to the ergonomics of the stand, to where that stand worker doesn’t waste time, to what you actually serve at that stand.”

Through the new streamlined design and process last season, as well as the simplification of menu offerings, STAPLES Center realized a 15%-25% increase not only in throughput, but also in the revenues generated from concession stands.

Russ Simons (far left) details a guiding business axiom: “If you don’t do your due diligence and can’t articulate the science behind your decision, then when you bring it to somebody who is going to make an emotional response, you’re predisposed to fail.”

Rise All the Cream to the Top

“I’m not an analytical guy,” Zeidman said. “I’m not an innovative guy to a certain extent. I look at myself more like a specialized generalist.”

The word “strategy” is derived from the Greek word “strategos”, which means “the art of the general”, and was used in Ancient Greece to refer to military generals. Like any successful military general, business executive, or leader of any kind, Zeidman and his fellow panelists are specialized strategists with general knowledge of all the components at their disposal. In the sports and entertainment industry, the most important components are their staff members working in the buildings. “They’re the experts,” according to Zeidman.

“I believe that everyone in this audience is the cream of the crop,” Zeidman said.

Through well-conceived thought leadership and well-defined processes for innovation, all of us in the sports and entertainment industry rise to the top together. #

Interested in attending ALSD 2018? Find out where our 28th Annual Conference and Tradeshow, including the Sports Venue Design & Build Forum, will be hosted.