At BBVA Compass Stadium, the Houston Dynamo and Levy Restaurants have redesigned one-quarter of the venue into a new F&B destination more native to the culture of Houston.
By Jared Frank, ALSD 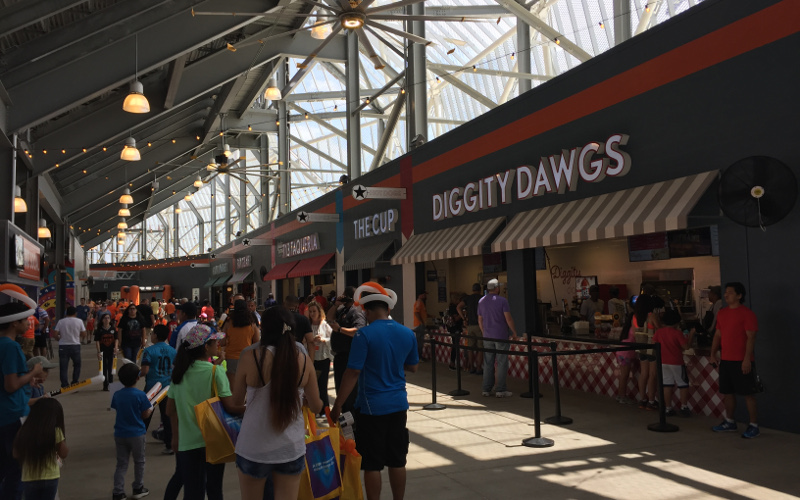 BBVA Compass Stadium is a top-three MLS venue again in 2017. With its European-inspired design, easy in its navigation, clear in its sightlines, intimate and loud in its atmosphere, as well as plentiful in its premium amenities, the home of the Houston Dynamo is perennially ranked among the best in Major League Soccer, a distinction that has required ongoing care and feeding since BBVA Compass Stadium’s inception in 2012.

Now in its fifth year, to keep pace with a competitive marketplace as well as the latest and greatest MLS stadia coming online across the continent, the Dynamo have renovated BBVA Compass Stadium, finding its true north in doing so.

In a joint effort with foodservice partner Levy Restaurants, the Dynamo broke ground shortly after the new year on a significant refresh of its south concourse and hammered home the final nails in time for the team’s March 4th home opener, transforming one-quarter of BBVA Compass Stadium into a food and beverage destination dubbed the “Taste of EaDo”.

EaDo is short for East Downtown. The 784-acre Houston neighborhood, shaped like a right triangle, surrounds BBVA Compass Stadium, which is separated from Downtown’s Minute Maid Park and Toyota Center by Interstate 69/US 59 on the northwest boundary.

“I don’t think that the continued growth of EaDo and the growth of our supporters section is coincidental.”

Influenced by the construction of BBVA Compass Stadium, EaDo has transitioned from an industrial neighborhood dominated by warehouses into a community of artists and hipsters, many of its 25- to 35-year-old residents living in apartments and townhouses immediately outside the stadium walls.

“The stadium was the first big investment into the EaDo area,” says Brett Zalaski, Vice President of Ticket Sales and Service for the Houston Dynamo. “A lot of [development] has been built around [the stadium] and continues to be built around it. The stadium was a strategic part of the birth of what people thought this EaDo area could be. It was a strategy by the city to develop something that would cater to a young, hip, fun demographic.” 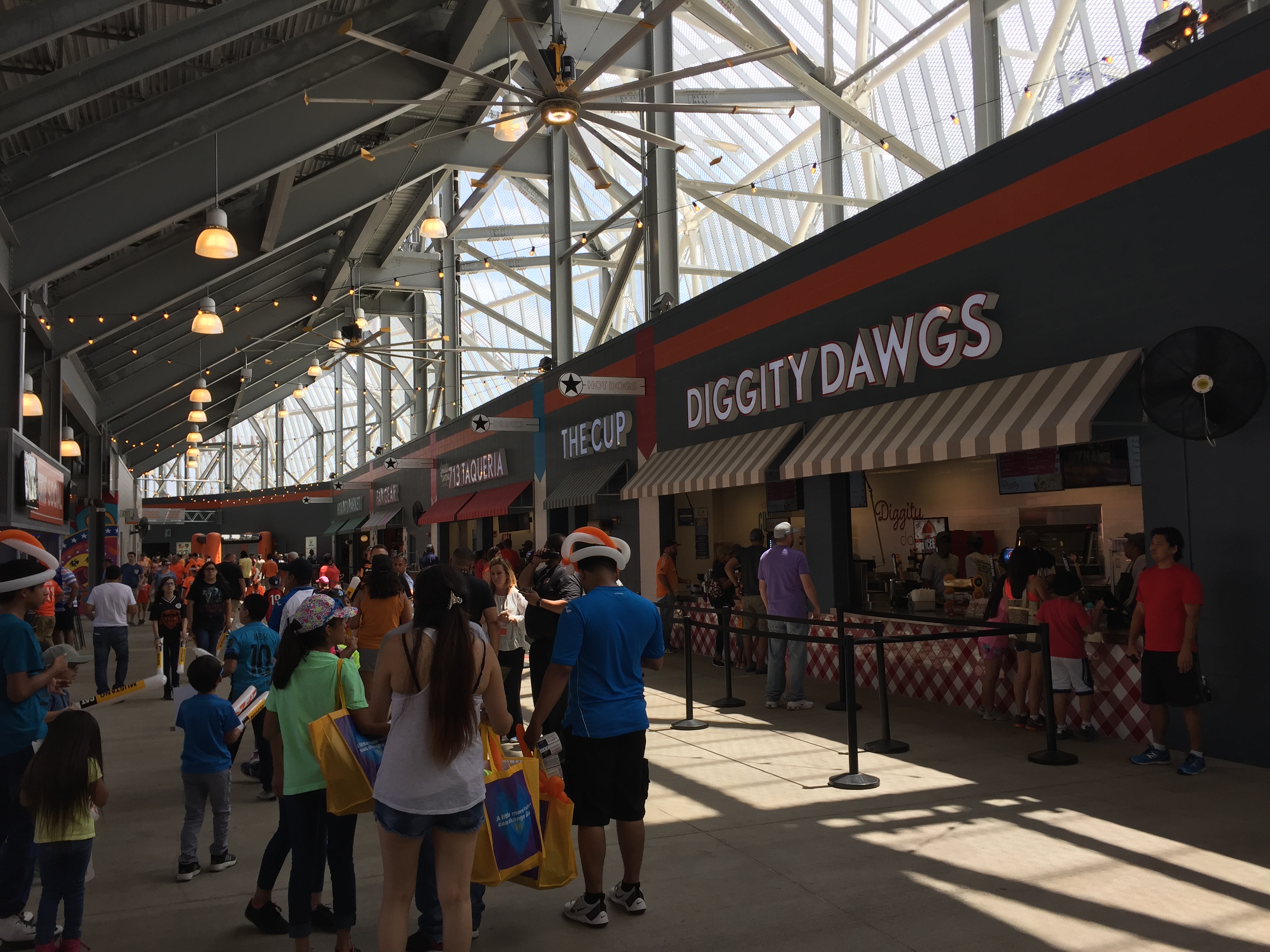 The food concepts created by the Dynamo and Levy Restaurants for the Taste of EaDo include the 713 Taqueria (street tacos and margaritas), the HTX International Market (sandwiches and 20 international beers and wines), and Diggity Dawgs, which features a two-foot Colombian-style hot dog.

The renovated south end of BBVA Compass Stadium serves as an accent wall, its blue color breaking up the bright orange covering every remaining corner of the 360-degree concourse.

The Dynamo are capitalizing on this infusion of “young, hip, fun” Millennials visiting and living in EaDo who look for affordable, authentic expressions of the culture in which they identify. Joining an already strong supporters group loyal to the team since its inaugural season in 2006 is a growing generation of soccer fans and a first generation of the Dynamo supporters in Houston.

The team’s supporter section is sold out this season, oversold for four out of the Dynamo’s first five games.

“The growth of this [EaDo] area has been very supportive of our attendance,” says Zalaski. “We believe the more this area grows, the more it will lend toward those people who are experiential. I don’t think that the continued growth of EaDo and the growth of our supporters section is coincidental.”

Soccer is a tribal sport. Overseas where the game works best, as well as in U.S. markets like Portland and Seattle, the culture of the city is ingrained into how teams define themselves. This authentic connection to culture inspires loyalty, and loyalty inspires repeat business.

To find the pulse of Houston culture, Curiology, Levy’s experience design company, travelled all around town to observe the local food and fare, and all things emblematic of Houston. This research informed the design decisions for the revamped south concourse, as well as the East End Ice House, which is a version of the Austin-style beer gardens popular throughout Texas, featuring craft beers, cornhole boards, as well as graphic art and décor native to the EaDo neighborhood.

From the F&B perspective, nearly all tastes are included. The mix of food offerings is meant to attract native Houstonians as well as the traditional soccer fan. The Taste of EaDo includes everything from the Pitch Side Pub with its fish and chips and traditional English-style beers, to the 713 Taqueria serving up Tex-Mex street tacos and margaritas, to the HTX International Market where I recommend the prime rib beer cheese grinder, to Diggity Dawgs featuring a two-foot Colombian-style hot dog, which comes with a carrying case.

“You have to find a couple friends to share it with because it is huge,” says Zalaski. 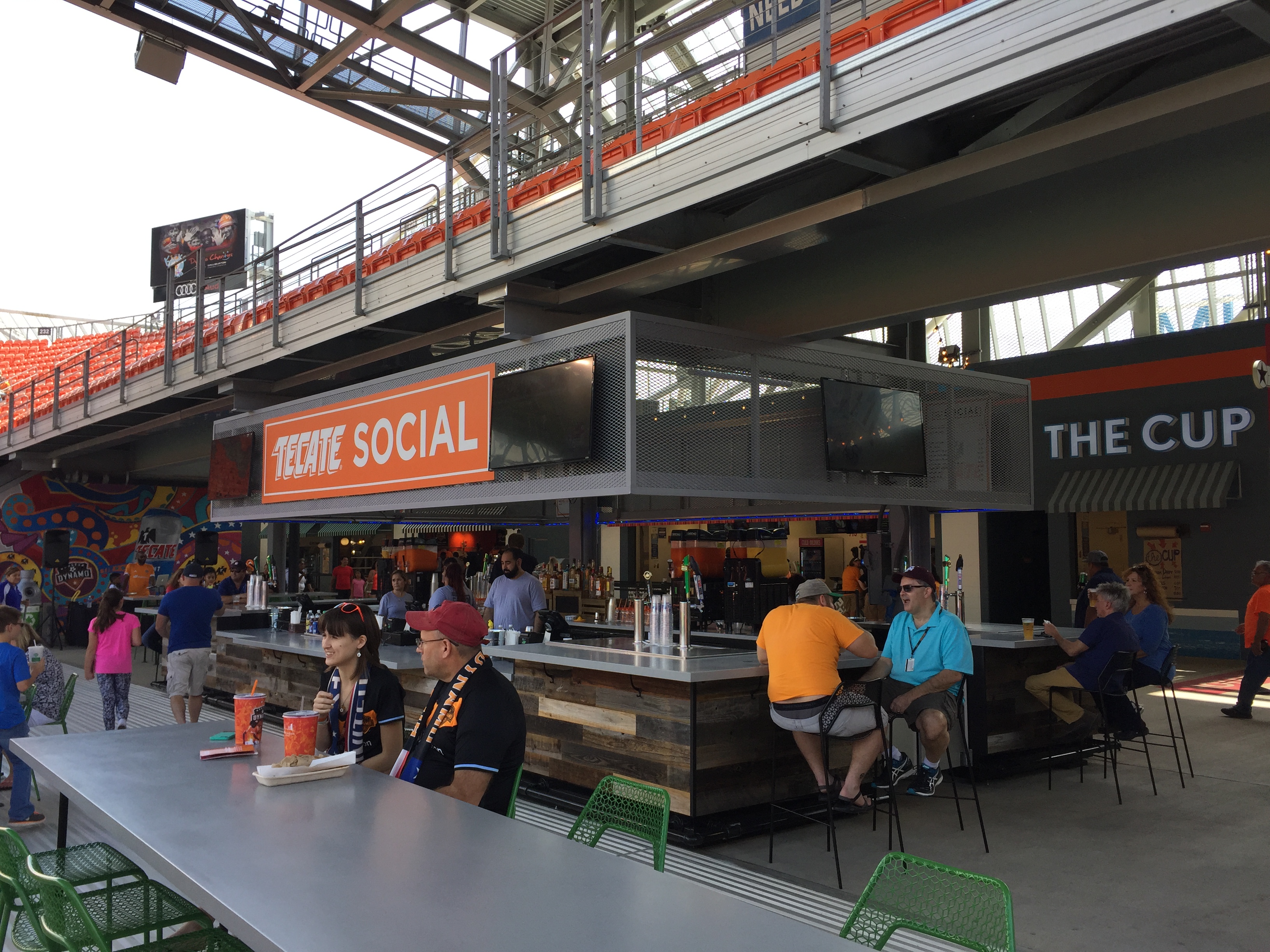 Located directly above the south goal line is the popular Tecate Social, a retrofitted viewing deck with a four-sided bar, drink rails, and bistro tables. Brett Zalaski says, “I have friends who have seats, but [Tecate Social] is where they want to watch the game from. It has become a signature spot in the stadium.”

From an aesthetics perspective, the Taste of EaDo serves as an accent wall for BBVA Compass Stadium. Prior to the renovation, the stadium was well…very, very orange for lack of a better description… perhaps too orange with every seat and nearly every wall carrot-colored.

The Dynamo brand is awash in orange, and the organization is extremely proud of that color, but the dash of navy blue in the Taste of EaDo captures the fan’s eye and attention as he or she walks through the new destination.

“You can see the thoughtfulness that went into how does this reflect the sport of soccer and how does this reflect what Houston is, not just in terms of design, but the different types of ethnic foods,” Zalaski says. “We are one of the most ethnically diverse cities in the entire country. It is a great representation of everything soccer and everything Houston, both in the design and the execution of the food.”

“The biggest learning is the more we embrace Houston and the culture of the city, the more our fans appreciate it and respond to it.”

Adding to the experience is Tecate Social, a viewing deck just above the south goal line. What was once an underutilized corporate space is now the most popular destination in the stadium for approximately 1,000 fans hugging up to a four-sided bar, drink rails, and bistro tables.

“I have friends who have seats, but [Tecate Social] is where they want to watch the game from,” says Zalaski. “It has become a signature spot in the stadium. The fan reaction has blown away what our notions were about it. And of course, the per caps back it up.”

Per caps for the south concourse have increased considerably, but not at the expense of other stadium locations where per caps have remained flat. The Taste of EaDo has not drawn business or cannibalized other areas. Fans are simply spending more.

Give the People What They Want

Teams and venues in Major League Soccer, perhaps more so than other North American sports leagues, are symbolic of the cities and cultures where the game is played. Now at BBVA Compass Stadium, one-quarter of the venue is designed specifically to connect the culture of Houston with its soccer team and fans.

With a little navy blue paint, bountiful availability of native food offerings, and a 360-degree bar with viewing deck to enjoy spirits and the spirit of the match, the Taste of EaDo delivers on its promise to turn BBVA Compass Stadium into Houston’s stadium, and points to team’s direction into the future.

“The biggest learning is the more we embrace Houston and the culture of the city, the more our fans appreciate it and respond to it,” says Zalaski.