The New Color of Night

The recently unveiled T-Mobile Arena on the Las Vegas Strip is a magenta mecca for hospitality and entertainment acts, and starting in 2017, will be home to the NHL’s newest expansion franchise. Yes, major professional sports have come to Sin City.
By Bill Dorsey, ALSD 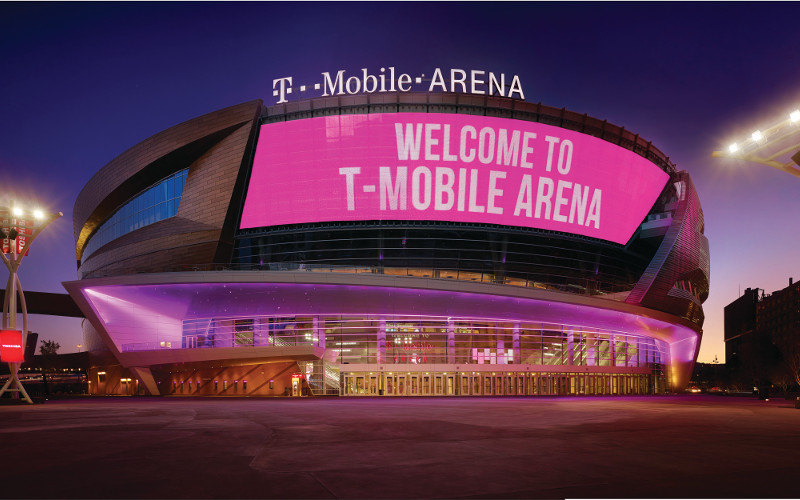 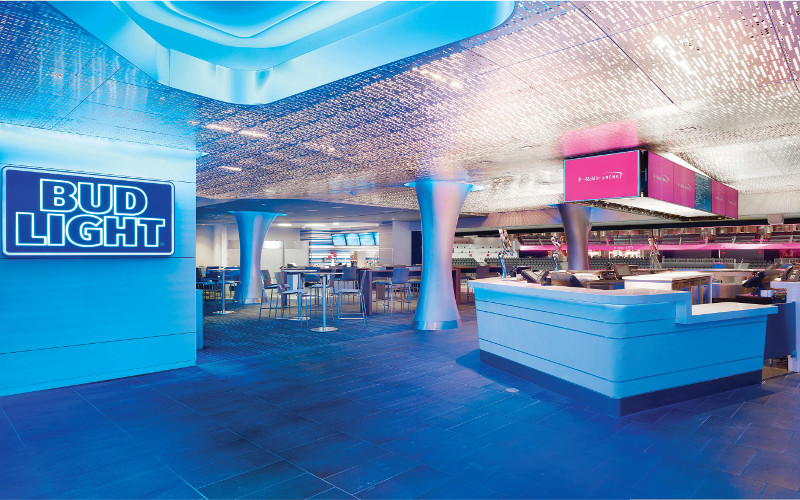 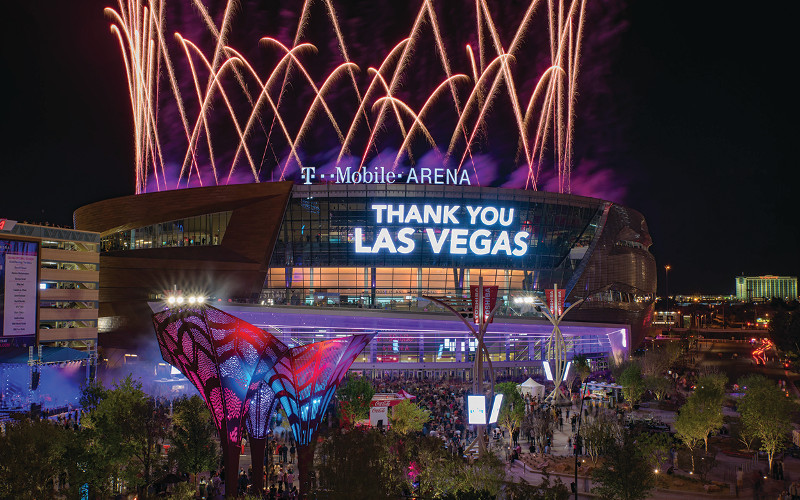 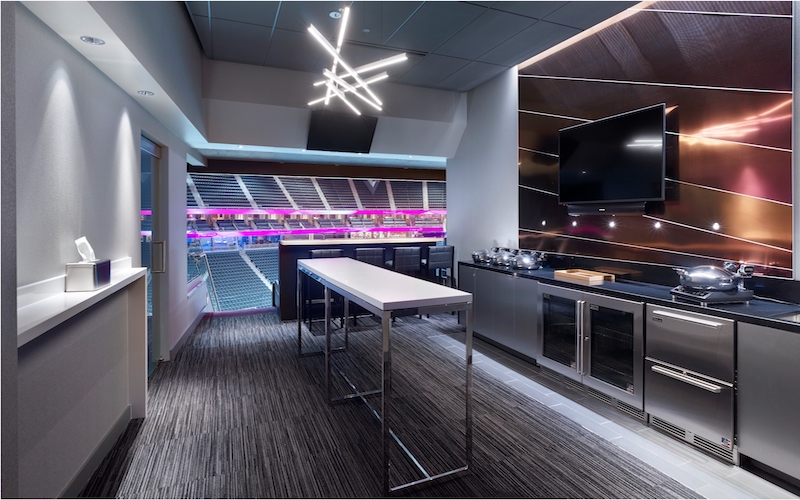 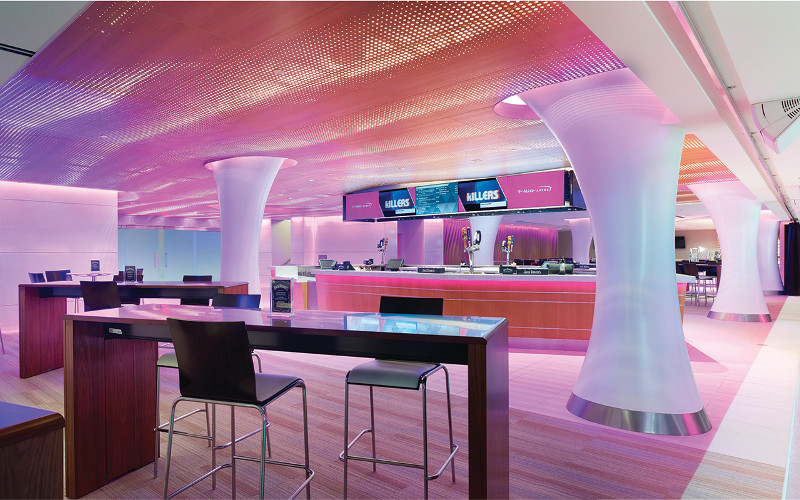 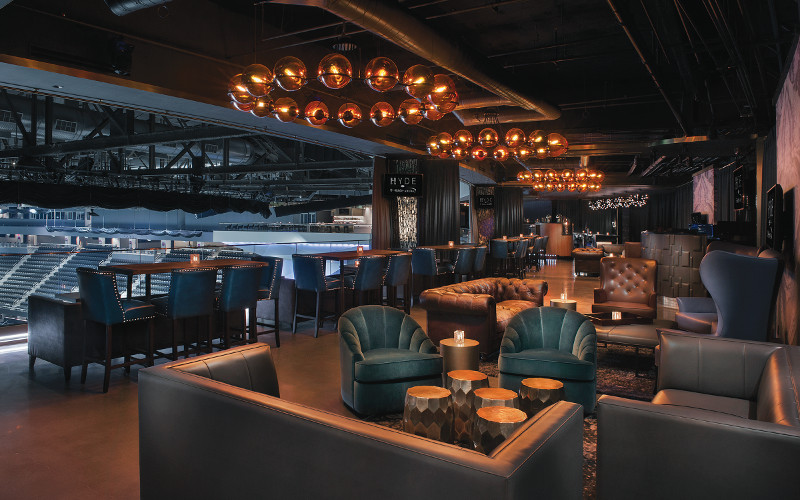 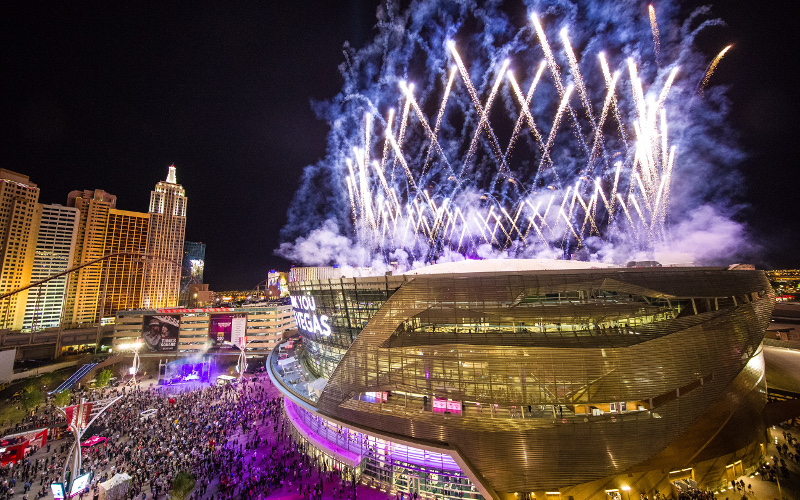 So I was on a road trip earlier this summer to Las Vegas, a uniquely American town with uniquely American architecture. I headed over to see Mark Faber who is the Senior Vice President of Global Partnerships at AEG and is responsible for securing the premium sales and sponsorship agreements at T-Mobile Arena, the latest-and-greatest sports and entertainment venue, which has sprung up in the Mojave like a desert flower.

T-Mobile Arena is located on the west side of the Las Vegas Strip, comfortably ensconced between two of Vegas' monolithic hotels – New York-New York and Monte Carlo.

There was some construction going on and roads were closed, so I was told by one of the accommodating locals that to get to T-Mobile Arena, I should enter Monte Carlo and follow the signs. Wow. I saw how large these hotels are because I was walking for a long time through a maze of corridors, gratefully following the signs until I came to an exit, walked out the door, and there it was – T-Mobile Arena, the once and future home of the NHL's newest franchise.

I was here to find out what this story is all about. What happens in Vegas is NOT going to stay in Vegas.

The arena itself appears to be an island surrounded by an ocean of concrete rather than parking. When I was told why this setup existed, that's when I started to understand the vision. But more on that later.

I headed over to the east side suite entrance (next to the box office) where Mark greeted me, and we began the tour of the building. Mark previously ran Sprint Center in Kansas City, and in some ways, I could see how these two buildings were similar and why Mark clearly loved this place. For one, both buildings are circular and modernistic. And for another, neither building had a permanent major league tenant.

For someone like Mark, that truth means hustling because without a permanent tenant, one has to be prepared for continuously rotating acts coming in on any given day. If it's Tuesday, it must be the Dixie Chicks. Tomorrow, get ready for Garth who is here for a couple of days, and then in comes Streisand.

On the premium side, Sally Bae, Director of Premium Sales, and Matthew Bown, Manager of Premium Seating, have to be similarly prepared each night for whatever suite holder tenants occupy the space, from crazy, country, sophisticated, elegant, to UFC.

The T-Mobile Arena staff is not the only group that must adapt. Levy Restaurants also demonstrates an amazing amount of flexibility in their menu selections. But more on that later.

Every act has unique demands, has its own stage, and has a completely different demographic coming into the building, so the foodservice providers better be ready as the beer drinking crowd at UFC gives way to the wine set at Barbra Streisand. It's kind of like opening day every day. It's almost exhausting to watch.

And yet today, no one is in the building, and it's eerily quiet. These buildings are like Dracula. They sleep when the sun is out, and at nighttime, they come alive, as does T-Mobile Arena in all its magenta glory.

Touring the building with Mark, our first stop was outside. That was a first. Of all the buildings I have ever been to, which is more than one and less than one million, I have never had a tour start outside. But that's the first place Mark showed me. He pointed out the two-acre concrete area outside the front entrance of the building called Toshiba Plaza, where T-Mobile Arena has seen up to 10,000 people milling about in queue for the big acts. The idea and the sponsorship name is similar to a one-acre area of L.A. LIVE outside of STAPLES Center. It's pretty big, says Mark. It's where many pre-function events, such as concerts, are held.

"Huh? No Mark, you hold concerts inside the building."

Yes, we do, was Mark's reply, but at this venue, concerts are also held outside the venue before the main event occurs. It's a pre-function space, and thousands come here to enjoy the events.

Unless it's a private event, the outside areas are non-ticketed events. Food trucks are brought in to feed the masses. Eventually, according to Mark, screens will be put up to have watch parties. There is already infrastructure in place.

You see, T-Mobile Arena has officially done what many others are only now talking about. They have created a true outside-the-venue-walls experience, and not just a place with large video boards and tailgating, but an honest-to-goodness immersive, outside experience. It's clever, even if during the day when Dracula is sleeping, the area appears a little like a parking lot with no cars.

Eight event level suites, or bunker suites, offer private hospitality space to entertain up to 24 guests and include access to 16 lower level seats in the arena bowl.

Once inside the building, it almost immediately reminds me of a cross between STAPLES Center and Sprint Center, which come to think of it, are two of AEG's largest properties. But what makes the arena so unusual is the unique joint-venture partnership between AEG and MGM Resorts International.

Kurt Amundsen and Tracy Tapp, both Principals at Populous, admit that working with two long-time, established developers is unusual to say the least.

"Most of the time, when we have clients and are building facilities of this magnitude, it's the first time they have been through that process," says Amundsen.

"All of our design meetings had MGM and AEG in attendance, as well as [owner's rep] ICON [Venue Group]," Tapp adds. "They were very involved and very hands-on through the interior package all the way to the furniture package."

The collaborative effort achieves real building value. T-Mobile Arena was constructed for $375 million, but MGM provided $125 million in land. If the land is added to the cost of construction, T-Mobile Arena is a half-billion-dollar building. $500 million is not chump change; it's Trump change.

This number does not include the $500 million franchise fee for the NHL's newest team that will begin play at T-Mobile Arena in September 2017. That price is a great deal more than the $80 million paid by the Minnesota Wild and Columbus Blue Jackets back in 2000. But then again, the NHL is a lot stronger than in those days in terms of media contracts, franchise valuations, and all the other things that go along with being selected as a new team.

Besides, Bill Foley, the wealthy owner of the Vegas expansion franchise, already has commitments for 15,000 season tickets, and the building is sold out of all but one of its 52 suites, a real trick for a city with an extremely small corporate base.

The NHL might also have selected Las Vegas over Quebec City in order to avoid placing another team in the Eastern Conference, furthering the current imbalance of 16 teams in the East, but only 14 in the West. The Canadian dollar is also weak at this moment, which is another reason why Vegas got the team, as well as a confluence of other factors that will never make the light of day. Just like Dracula. 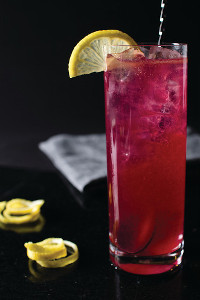 In addition, just because there is not another team in Canada does not mean that Canadians cannot come to Vegas. According to Rick Arpin, Senior Vice President of Entertainment and Development at MGM Resorts International, 20% of all international traffic coming to Vegas is from Canada, and Vegas is a city that has a lot of visitors – 42 million per year and 80,000 per week. When it's cold in Canada, Vegas looks mighty inviting. T-Mobile Arena intends to reach out to those teams and offer fan travel packages.

My tour with Mark continued, and to be truthful, because I've been in more than one building and less than one million, I know there are some things arenas can't get around. There has to be room for 20,000 seats to sit around a rather small oval big enough for hockey, basketball, and touring acts. There are suites, club seats, hospitality clubs galore, restrooms, kitchens, locker rooms, and places to put the Zamboni. In the bowels of the building, there are miles and miles of cable, each strand going somewhere and doing something, such as feeding the 650 digital boards in the 650,000-square-foot T-Mobile Arena.

But it's what is not expected that the new builds are expected to do. T-Mobile Arena has a lot of interesting places of the heart. I'm not sure I've ever seen more bars, restaurants, eclectic niches, and unique spaces in any building I've ever been to. Las Vegas caters to such an international clientele that the food served in this building should be called the United Nations Food Kitchen. Being everything to everyone is what Vegas is all about, and T-Mobile Arena aims to please.

Todd Goldstein, Chief Revenue Officer at AEG, has called the building "disruptive and irreverent – a perfect complement to our vision of entertainment in Vegas."

There are some truly unique places in this building, such as Hyde Lounge, an 18,000-square-foot hospitality mecca at the top of the building, far from the madding crowd. And because of such interesting spots in this building, people have told Mark Faber repeatedly that this arena is the best building on the planet.

Well, I don't know about that. There are a great many buildings, so I won't get into my opinion, but I will say that with an NHL team and all the touring acts, the building has the capacity to compete with STAPLES Center, Madison Square Garden, United Center, American Airlines Center, and a few others which combine major tenants and major acts and which never sleep…except sometimes in the day, alongside Dracula.

What do you consider the best arena in the venue marketplace?
Write to Bill at bill@alsd.com.