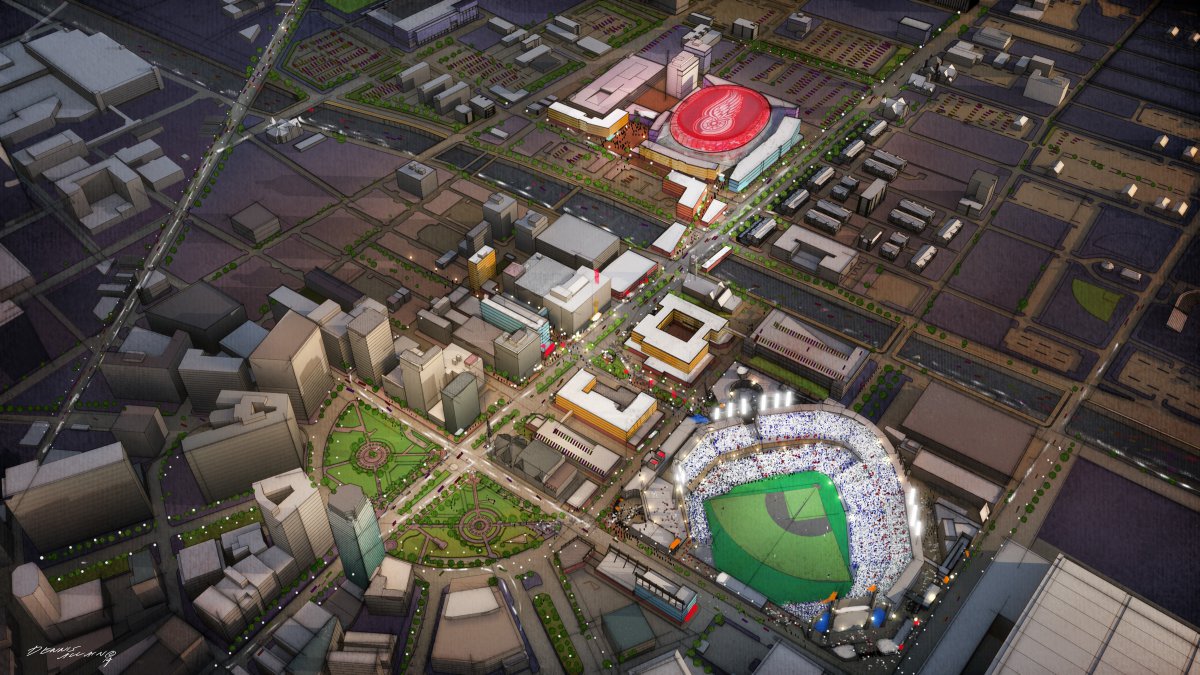 It’s the dawn of a new day in the Motor City, where an upsurge of growth is muting the jokes and editing the national media’s narrative that has circulated in recent years.

Today, a new narrative is rising out of the ashes of Detroit, one that you probably haven’t heard yet, one of resiliency and resurrection, one being led by sports and entertainment. Sometimes good news travels much slower than bad news, so let’s take a moment to get caught up to speed.

But now Detroit is in the midst of a grand revitalization, led in large part by the investments of entrepreneurs (and sports franchise owners) like Dan Gilbert and the Ilitches, who are breathing life into the city’s economy by developing The District Detroit – 50 downtown blocks of mixed-use development, anchored by a new arena for the Detroit Red Wings.

The District Detroit and new arena are among the largest financial commitments ever made by a team owner for a city’s restoration.

“The impact this project will have on Detroit’s economy, southeast Michigan, and the state of Michigan will exceed $2 billion, but most importantly, it will accelerate the redevelopment of Detroit,” says Mark Rosentraub, Professor of Sport Management at the University of Michigan, who has been studying the linkage between sports and urban economic development for more than 30 years.

“The Ilitches are making an enormous, enormous investment to help bring our city back,” adds Tom Wilson, President and CEO of Olympia Entertainment, which handles business operations for the Detroit Red Wings. “There’s a greater purpose than just an arena. It’s about the transformation of a city and a community – and that’s a remarkable story.”

To put 50 blocks in perspective, consider that the entirety of downtown Grand Rapids, Michigan is 46 blocks. “We’re really building a city within a city,” says Wilson.

Located in the heart of it all, connecting downtown and midtown, The District Detroit has something for all lifestyles, not just sports fans. There will be green space and public gathering spaces, a variety of restaurants and retail, as well as much-needed residential units for a brimming downtown rental market that sits 99% occupied. “If it’s livable, somebody’s in it,” says Wilson of the current downtown real estate environment.

The centerpiece of The District Detroit is the Detroit Events Center, the new home of the Detroit Red Wings, scheduled to open in September 2017. The arena is meant to set the standard in an urban venue, with architecture and quality that will permeate throughout the 50 blocks.

The Detroit Events Center is currently being built 40 feet into the ground below street level. Because it will top out somewhere around only 100 feet at its highest point, four-story commercial and residential structures can be built throughout the District and not feel out of place, or rendered insignificant by the arena’s size.

The arena’s exterior will be concealed by examples of these four-story buildings to further root it into the larger fabric of the District. This architectural field is also meant to mimic the diverse styling that currently exists throughout downtown Detroit.

“If we do this right, [The District Detroit] will feel like it’s been here for 20 years because everyone will fit in and have a comfortable feeling that they belong,” Wilson says. “[The Detroit Events Center] is one part of the neighborhood.”

“You should be able to walk right by this building without realizing it’s an arena,” adds Ryan Coyle, Director of Corporate and Premium Sales for Olympia Entertainment. “This was meant to be part of the streetscape, part of the urban environment.”

To read the rest of the details of The District Detroit and the Detroit Events Center, ALSD members can peek inside the 2015 Fall Issue of SEAT Magazine.