The recognizable wall of suites has been demolished, opening up ambitious space that connects, instead of separates, all Hawks fans and concert goers together in innovative entertainment environments.
By Ryan Gedney, Senior Design Principal, HOK 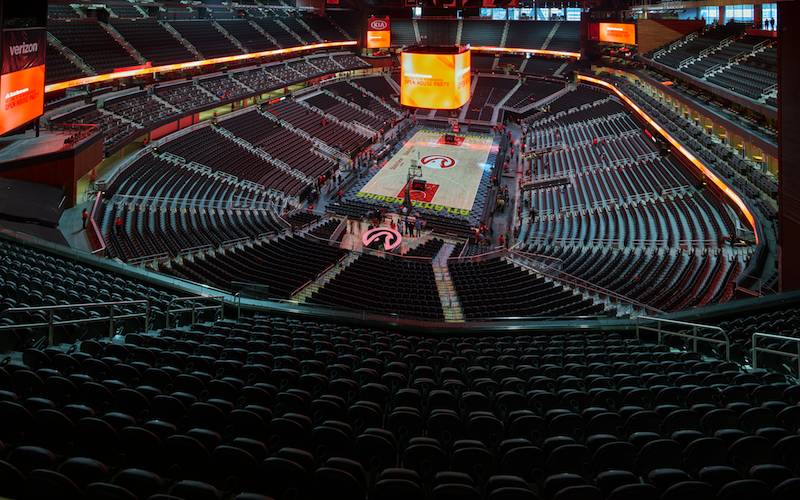 In making the decision to renovate their 20-year-old State Farm Arena home instead of building new, the NBA’s Atlanta Hawks approached the $192.5 million project with the mantra that “renovation is innovation.”

The transformed arena (formerly Philips Arena), which began hosting games and live events in late October, demonstrates that the Hawks are one of the NBA’s most forward-looking organizations. It is now one of the best sports and live entertainment venues in the U.S.

Guided by Chief Executive Officer Steve Koonin, the Hawks’ leaders emphasized from the beginning of the planning process that the renovated arena needed to transcend the role of serving as their home court and a world-class host for concerts and other events. The entire experience needed to represent the city of Atlanta.

“Atlanta is a city on the move. It’s not a yesterday place – it’s a tomorrow place. The design needed to reflect that.”

“We have a brand mantra called ‘True to Atlanta,’” says Thad Sheely, the Hawks’ Chief Operating Officer. “This means that we’re authentic, we’re full of Southern hospitality, we’re inclusive as the home of civil rights, and we’re innovative. Atlanta is a city on the move. It’s not a yesterday place – it’s a tomorrow place. The design needed to reflect that.”

To target next-generation Atlantans, HOK’s design team supported the Hawks’ market research about what fans were looking for in their live entertainment experiences by leading focus group meetings on the arena floor. This direct engagement with the fans was invaluable in helping conceive ideas for an exceptional experience while maximizing revenue opportunities for the Hawks.

To inspire our design team, the Hawks took us on a four-hour tour of the BeltLine, an ambitious urban redevelopment project that is connecting the city’s different neighborhoods through a 22-mile loop of trails and parks constructed on former railroad corridors. This tour gave us an understanding of Atlanta’s texture, history, diversity, and reputation as a “city of neighborhoods” that we were then able to embed into the arena design.

To create a more social experience, the renovation included demolishing an existing wall of 90 suites that had spanned four levels on the arena’s west side. Our design repurposed this space as viewing terraces, multilevel concourse connections, and an array of new premium seating products.

This blend of different elements and different price points that make up the suite experience includes the 18,000-square-foot Atlanta Social experience, where there are no walls, and couches have replaced individual seats. Fans here enjoy open views of the action while mingling in cabanas, at terrace tables, and in the Bridge Bar.

Taking down the interior walls between the suites and the concourse reconnected this space to the rest of the arena and allowed for views of the court from concession areas. To allow for this open design, the renovation included the installation of a new 173-foot-long truss, supporting a one-million-pound roof load.

The arena’s seating bowl now has taken on an entirely different feeling. It’s an example of how design thinking can uncover unforeseen possibilities within an existing building shell. 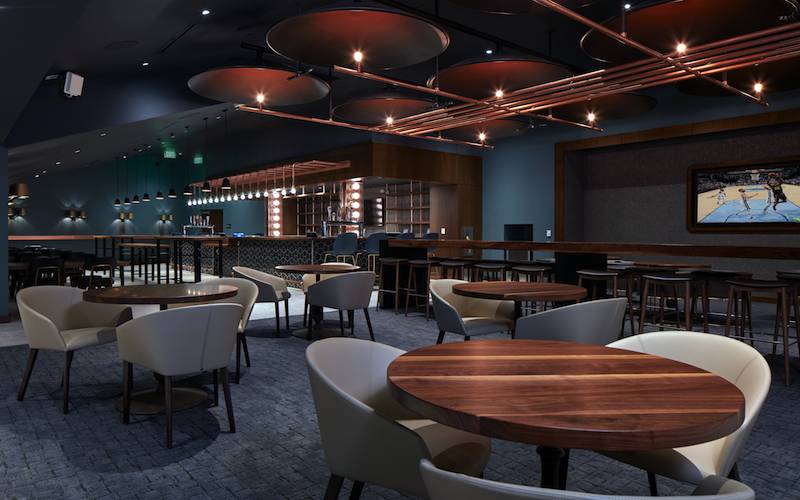 Gone is the arena's suite wall, replaced by a combination of viewing terraces and new premium environments. All photography is courtesy of HOK.

Taking Premium to a New Level

The result? A venue full of premium offerings similar to those in other facilities.

But renovations free up teams to think more boldly about creating innovative premium experiences for their fans. At State Farm Arena, many of the premium seating concepts are “firsts.” This includes the Loft Suites, which feature unparalleled openness between suites, and the Topgolf Swing Suites equipped with golf simulators.

Incremental renovations also allow for concept testing. At State Farm Arena, the Hawks opened the NBA’s first-ever courtside bar – the Hawk Club – for the 2017 season. The undeniable success of this new arena concept (all courtside season ticket holders renewed their packages for 2018), which allowed fans to socialize in a club just a few feet away from the floor where some of the world’s best athletes were competing, gave the Hawks confidence that their strong desire to create more social experiences in the renovated arena was the right approach. 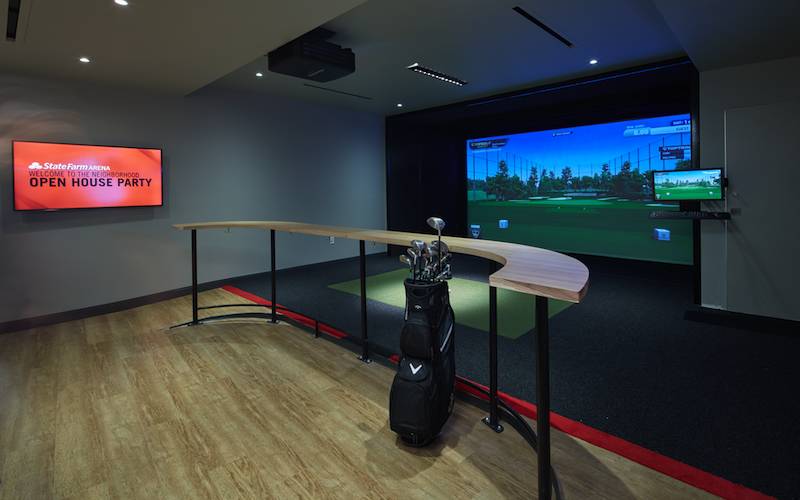 As part of enjoying a great night out, today’s fans are no longer satisfied with washing down a hot dog wrapped in aluminum foil with a soft drink or beer. Demands for higher-end, local cuisine, and fan-friendly pricing are forcing the reimagination of the food and beverage experience in venues worldwide.

With that in mind, the Hawks wisely pushed for the entire restaurant experience in the revamped arena to be as good or better than the experience at a four-star restaurant in the city. With plans to serve nearly two million guests per year at games, concerts, and other events, the arena essentially is Atlanta’s largest restaurant.

The Atlanta Hawks and State Farm Arena hired Executive Chef Joe Schafer, a renowned chef from one of the city’s four-star restaurants, to guide a complete reinvention of the food and beverage strategy and spaces. Chef Joe has leaned on his relationships with local restauranteurs to ensure that homegrown flavors and Atlanta favorites are represented throughout. He has collaborated with these local restauranteurs and Levy Restaurants to design a menu that can be delivered quickly without sacrificing quality. Even the kitchens of the traditional concession spaces were redesigned to function more like restaurant kitchens. This food and retail market celebrates Atlanta’s diversity and unique food culture.

The Hawks have partnered with local influencers, celebrities, and businesses who understand the city of Atlanta and what fans are seeking in the event experience. Zac Brown’s Social Club is a full-service restaurant serving up Southern cuisine and the country music star’s memorabilia. Killer Mike’s SWAG Shop is the local hip-hop artist and activist’s four-chair barbershop with views of the court. And Giovanni DiPalma’s Little Italia is the Atlanta restauranteur’s collection of restaurants serving up local premium offerings. 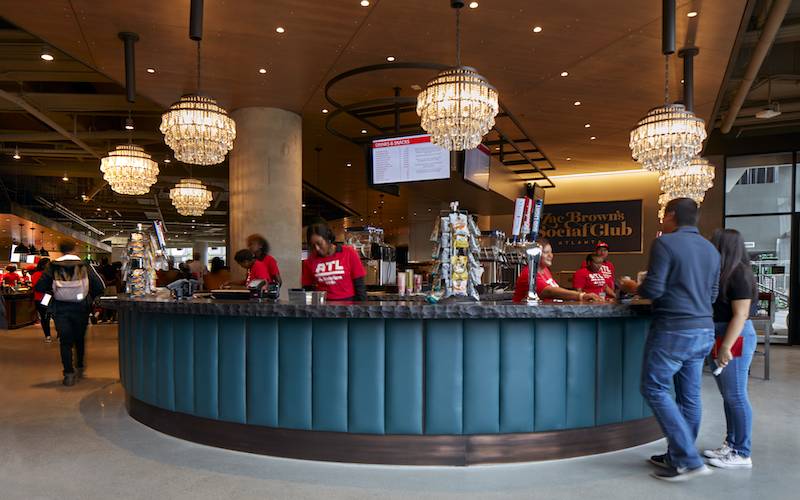 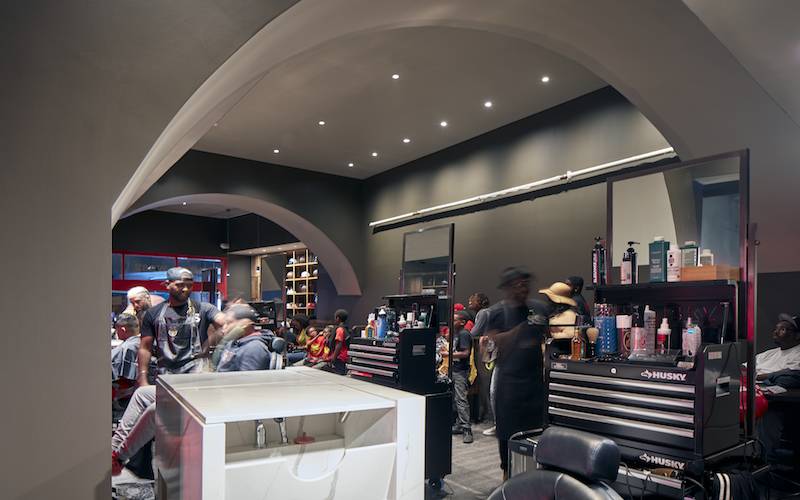 The result of the Hawks’ quest for originality and authenticity for this project is an arena that brings people together and frees them from their seats, so they can move around, socialize, and consume events on their own terms while still experiencing the energy inside the seating bowl.

For other teams and venues considering a phased renovation over a decade or a massive overhaul over a shorter timeframe, prioritizing innovation and thinking holistically about long-term ambitions for the venue will help create the dynamic experiences fans are seeking – without breaking the budget.

And when venues create these craveable experiences, people will come.