Renovations on both sides of the asphalt begin with modifications to the racetrack itself. A relocated start/finish line will soon be surrounded by a new grandstand and revamped infield experience, bringing fans under the hood on race day.
By Jared Frank, ALSD 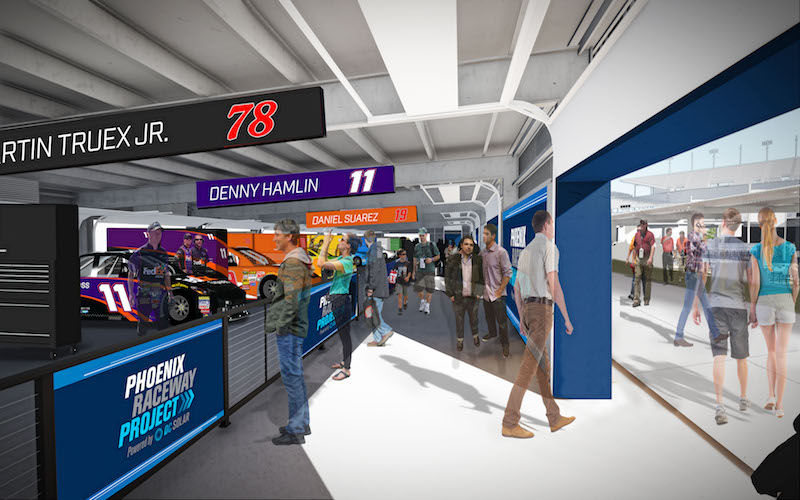 Bedlam is coming to the Valley of the Sun. And the world of motorsports cannot wait for the checkered boil at the relocated start/finish line at Phoenix Raceway.

Currently located at the midpoint of the north straightaway, the start/finish line is moving to the one-mile track’s famous dogleg, a span of asphalt already notorious for drivers dive-bombing into the turn and sometimes into each other. By modifying the track geometry (the only NASCAR facility with such a layout), drivers will soon race through the turn during what promises to be a furious finish.

“He means that in a good way,” Sperber says. “That’s going to be a really exciting change. And with that movement of the start/finish line also comes the movement of the restart zone. Nowhere else in NASCAR do you have a restart zone that’s placed in a turn.”

For any readers not acquainted with racing strategy, consider this analogy. What if the Arizona Diamondbacks rotated their diamond 90 degrees at Chase Field? Think about the short home run porches such a reconfiguration would create. Hitters would be aiming to club a gopher ball with every plate appearance. At Phoenix Raceway, drivers will bring home run swings with every lap.

“With today’s design, there’s much more of an emphasis on socialization.”

Construction broke ground in February and is scheduled through November 2018, with renovation features coming online incrementally.

No public money will be used to fund the facelift. International Speedway Corp., Phoenix Raceway’s parent company, is picking up the entire tab.

Upon completion, the intensified thrills of the racing product will be surrounded on both sides of the track by new frills experienced by few race fans before, including enhanced food and beverage offerings, new premium amenities, as well as infield innovations and garage access with no current comparisons.

Built in 1964, the existing grandstand structures at Phoenix Raceway do not meet minimum standards for a modern sports venue. A lack of vertical transportation, bench seating, and other dated aspects have challenged Phoenix Raceway’s attendance in recent years.

Now many of those less desirable seats are being torn down. The current north grandstand will be demolished, while the existing Bobby Allison Grandstand will be overhauled and married with concourses lined with concessions, retail, and restrooms in a new modern structure being erected around the repositioned start/finish line.

The overall seating capacity will settle at 45,000, down from the current 50,000. All seats will feature individual chair backs, arm rests, and cup holders.

“Some of the bones were just fine,” says Jim Renne, Principal at ROSSETTI, who provided the master planning for the project. “Working within that context, we looked at what made this feel like a natural evolution of the stadium so it felt like one stadium.”

A new grandstand will connect with the existing Bobby Allison Grandstand to create one seamless structure, featuring individual seats and Wi-Fi.

Additional major perks of the grandstand movement and merger are shade and proximity to parking. At the Avondale, Arizona venue, shade is a premium. And surrounded by the Estrella Mountains, there is available real estate for only one general parking area to the west of the racetrack. The new grandstand points spectators northeast, putting the sun at their backs and their feet a few steps closer to parking.

Entrances to the enhanced racing experience are being updated to large-scale apertures akin to the injectors at Daytona International Speedway. Dubbed “canyons” in Phoenix, these two points of entry create clarity and impact, both from a distance and as fans approach the venue.

Sponsor activation will begin at the base of each canyon, scale up new escalators and elevators to the main concourse, and continue as fans circulate the grandstand’s amenities.

One of the canyons will be open and operational in time for the March 2018 NASCAR event at Phoenix Raceway, as will the track’s new midway (soon to be a half-mile in length) now known as the DC Solar Power Pavilion.

Within what will be one seamless and modern grandstand experience, Phoenix Raceway is overhauling its premium inventory. Through numerous studies assessing the dense sports market’s appetite and tastes for premium seating over the better half of the past decade, Sperber and his design team discovered corporate customers looking for a higher-end suite product with a new twist.

Throughout the venue marketplace in recent years, the industry has observed a migration away from theater-style suite experiences. The star of the show on the suite level is no longer the event itself. Guests no longer arrive at the venue, hunker down, and watch every lap or every play. Today, it’s much more of a social environment with fewer fixed seats.

“It’s much more akin to the way people consume sports now, which is more casually.”

“[Our existing suite configuration] was geared towards that old way of consuming motor racing,” Sperber says. “With today’s design, there’s much more of an emphasis on socialization. The design started from that standpoint. And all the appointments are much more modern.”

“The typical suite here has a top level and exterior seats below,” adds Renne. “What we changed was to create more casual seating. We eliminated a tier, creating a wider platform, so you have casual seating above, casual seating below, and it’s much more akin to the way people consume sports now, which is more casually.”

All existing suites at Phoenix Raceway are being reconfigured and refurbished in time for this year’s Monster Energy NASCAR Cup Series semifinal race – the Can-Am 500 on Sunday, November 12th. New suites overlooking the start/finish line in the dogleg will be added for next November’s race. Post-renovation in 2018, Phoenix Raceway will boast 55 new suites, accommodating groups from 18 to 48 guests.

Also opening for the November 2017 race will be Curve – a two-level, 300-person hospitality club positioned above what is now Turn One, and will be Turn Three after the relocation of the start/finish line. The 5,840-square-foot indoor space with 844-square-foot private patio features three unique seating areas, an air-conditioned lounge atmosphere with modern furniture and fixtures, complimentary beer, wine, and soft drinks (spirits are available at a cash bar), as well as access to pit road and prerace ceremonies. Pricing for the three-day Can-Am 500 weekend is $1,399.

The suite product is being redefined by changing consumer behaviors, with space reconfigured for socialization, as opposed to watching every lap.

Partying with the In Crowd

A hallmark of the Phoenix Raceway project is what’s happening inside the track. ROSSETTI’s grandstand design meets up with DLR Group’s infield reimagination at a new pedestrian tunnel being built in the dogleg. This new experience inside the crash wall will be flush with innovation, providing immersion opportunities found nowhere else on the NASCAR circuit or most stick-and-ball facilities.

Over the summer of 2018, a new Fan Zone will be constructed, providing guests with opportunities to interact with race teams during prerace activities through to participating in Victory Lane.

Causing quite a stir of excitement is the interactive garage. [CONTINUE READING PART 2]