The Spoelstra Surprise at ALSD 2017

When sports marketing legend Jon Spoelstra came to the 27th Annual ALSD Conference and Tradeshow, he knew he was to receive the Bill Dorsey Visionary Award. But he didn’t know who would be presenting it to him.
By Jared Frank, ALSD 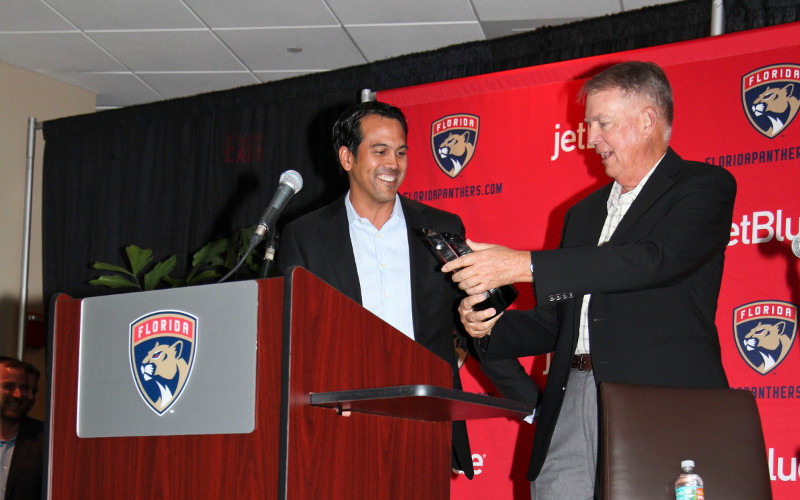 Secrets are not the ALSD's specialty. I've never known any of us in the company to be able to keep a secret. Not one. The day ALSD Founder and Chairman Bill Dorsey keeps a secret is the day pigs fly. His sheer excitement for a good idea often gets the best of him, and the cat is let out of the bag to meow across the entire sports and entertainment business universe.

So when we first started discussing Jon Spoelstra as a candidate for our annual Visionary Award, it came as no surprise to me that Bill soon after emailed 10,000 of his closest friends to tell them about it.

What came as the shock of my lifetime is how Bill left a cork in who the award presenters were, even after that cork was high and the bottle deep during the first three days of networking in Miami at this year's conference.

We had the ace of spades up our sleeve, and Bill kept it there, knowing it was not his card to play.

What Should Not Have Come as a Surprise

Wednesday at the ALSD Conference and Tradeshow did not go exactly as planned. Mother Nature keeps South Florida well hydrated in the summer months, so it should not have been a big surprise that we had to dodge a few sprinkles at our Premium Tailgate Event outside BB&T Center, home of the Florida Panthers. In between monsoons, we pulled it off, and attendees got a taste for the potential revenue streams bubbling outside the venue walls.

Inside BB&T Center, the showers in the Chairman's Club were of reverence, admiration, and respect. Enter part one of our Spoelstra surprise. 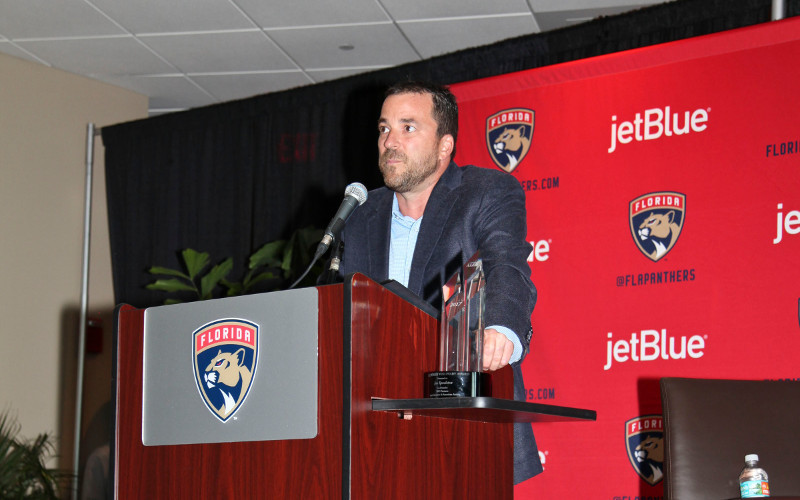 Now Co-Head of CAA Sports, Howie Nuchow began his career in the sports industry as an intern for the New Jersey Nets, working under Jon Spoelstra.

The Student Presents the Teacher

Howie Nuchow is currently the Co-Head of CAA Sports. But he started his rise to the top in the swamps of New Jersey, picking up Jon Spoelstra from the airport as an intern for the Nets.

“There was hardly a day that we didn't speak in that entire time,” Nuchow said in his remarks during the presentation of the Bill Dorsey Visionary Award to Jon Spoelstra. “What I experienced in that time was nothing short of the greatest mentorship anyone could have had in business.”

With heartfelt gratitude, Howie orated his personal affection for Jon and thanked him on behalf of our entire industry for the “Spoelstra philosophy of selling”, a mantra that has echoed through sports conferences and sales floors for decades. There would be no Brett Yormark, no Scott O'Neil, no Tod or Tim Leiweke without Jon Spoelstra.

“There is no one more deserving of this award than Jon Spoelstra.”

“Many of you, whether you know it or not, are being taught by someone who learned from Jon or are selling in a style that Jon created,” Nuchow said.

Jon Spoelstra taught a generation of executives that ticket sales mattered, and that training ticket salespeople mattered even more. When most sports business executives simply hired young people, gave them a phone book, and told them to start dialing, Jon put young sales reps through rigorous seven-day boot camps on how to sell, and mentored them throughout their entire time in the organization.

“He created upward mobility by giving us the opportunity to manage other ticket people, so that we could learn how to lead,” said Nuchow. “He added other areas within ticketing to our responsibilities. He taught us what it meant to manage campaigns, data marketing, and direct response advertising.”

Spoelstra also taught the sports world that taking risks was imperative and a way of life. If executives didn't create new things, they would fail. “Or even worse, you would be average,” said Nuchow.

Howie Nuchow worked with Jon Spoelstra for 15 years, starting with the Nets and continuing at Mandalay Baseball Properties. So I believe him when he said, “I truly believe [Jon] is the greatest sports marketer of our time.”

I also believe Nuchow when he says only two people have learned more from Jon, and they are his children. Enter the ace of spades. 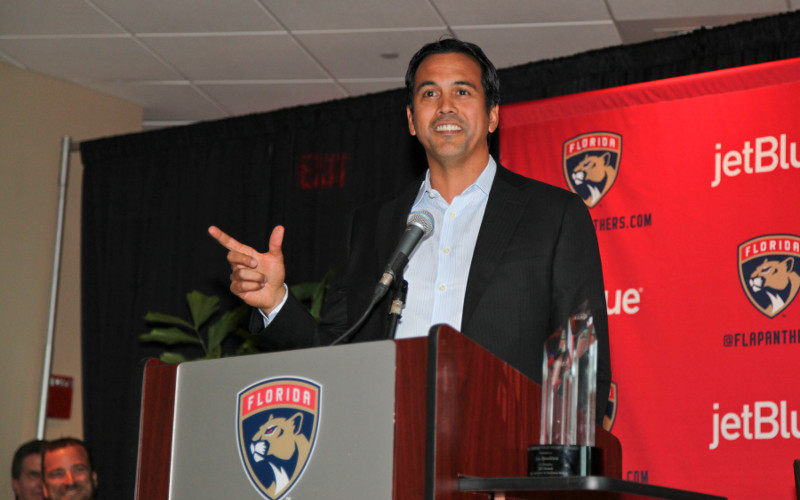 Erik Spoelstra was supposed to be in Las Vegas. Most of us know Jon's son as the Head Coach of the Miami Heat and a two-time NBA Champion. The team was in the heat of Summer League. No chance Erik could make it to take part in the presentation, right?

“I would not miss this opportunity,” Erik said in his opening remarks.

Erik is a man who has spoken to 500,000 people at championship parades, 20,000 people in sold-out arenas, and multiple Hall of Fame players hundreds of times. But he had never shared a stage with his father before.

“He's always tried to teach, develop, help people grow, and let them chase their own dreams.”

The son explained to the audience that the father, while incredibly gifted and committed to his profession, used sports marketing as a vehicle to do what he really wanted to do with his life, and that's develop, teach, and mentor.

“He's always tried to teach, develop, help people grow, and let them chase their own dreams,” Erik said. “He's always been so giving and so sharing.”

He continued, “It's really helped me and my ambition as a coach. Even when you put together a super team, it's still about development. You find so much more purpose when you're giving to somebody else, you're serving somebody else, and helping somebody else accomplish their dreams.”

The stories told about Jon Spoelstra are legendary. Some are even true. Erik was happy to confirm a couple of old industry favorites.

“When I was about ten years old, yes, my dad did get traded,” Erik said. “He got traded to the Indiana Pacers for two weeks of services in sports marketing for a player named Don Buse.”

Crazy as that trade sounds, these crazy things became the norm for Erik and the Spoelstra family.

“When I was in college, yes, he did come this close to changing the name of the Nets to the Nike Nets,” said Erik. “He was going to change the name of East Rutherford to Nike. It was this close before David Stern put the axe on that.”

And who can forget perhaps Jon's most famous marketing campaign. In 1994, the Nets sent rubber chickens via direct mail to all season ticket holders who had not yet renewed. The accompanying card read “Don't Fowl Out!”

“I can't tell you how many rubber chickens we had in our house growing up,” said Erik. “I became so used to these outrageous ideas. He always thinks you have to think different. You have to think crazy.”

From left to right, Howie Nuchow, Jon Spoelstra, and Erik Spoelstra made this year's Visionary Award presentation the highlight of ALSD 2017.

Jon Spoelstra accepted the Bill Dorsey Visionary Award from his son Erik in signature style. After thanking Erik, Howie, and the owners he worked for who allowed him to do these crazy things, Jon recalled two animals that inspired his journey. I wasn't expecting to hear Jon Spoelstra talk to me about animals, but that's his genius on display.

The first animal was Pegasus, the winged horse that in Greek mythology represented opportunity.

“I've seen a lot of pigs in the air flying around.”

“I've done that most of my career,” said Jon. “I looked at opportunity. That's been the most important thing for me. I realized there are certain things that you have to do [in life]… If you look at ‘new as a way of life', you take what's new to add to something that's old.”

Jon Spoelstra's second spirit animal is a pig. He recalled that most of his ideas over the years were met with people muttering under their breath that they would work “when pigs fly.”

“I've seen a lot of pigs in the air flying around,” Jon said.

“A bad idea is a great idea as long as you keep throwing ideas out there,” Erik said. “You don't know when you'll get to the one that strikes.”

As the lightning was striking outside, the ALSD struck gold inside. We only give out one award each year, and this Visionary Award is only given to those who have made a significant impact on the industry and, more importantly, on the people in this business.

“[Jon] has taught a generation of young people how they can impact change in their companies, careers, and the industry at large,” Nuchow said. “I personally believe that there is no one more deserving of this award than Jon Spoelstra.”

Somewhere, a fleet of flying pigs could not agree more. #

The ALSD would like to thank Howie Nuchow and Erik Spoelstra for their surprise visit, and for providing us with one of the greatest memories ever experienced at the ALSD Conference and Tradeshow.